The Barrie Farmers’ Market awaits you

These days, more and more people are making the healthy decision to buy locally grown fruit and vegetables, meats, dairy, eggs, baked goods, and handmade products from farmers’ markets. A wonderful connection is made when you talk to the people who take pride in producing your food!

Once you visit our market, you’ll know why the Barrie Farmers’ Market is such an extraordinary shopping and social experience.

We are older than Canada

The Barrie Farmers’ Market was born on April 24, 1846 when a grant of land was awarded to the farmers of Simcoe District (now Simcoe County). The grant, on the letterhead of the Province of Canada, awarded three and one half acres in the shape of a parallelogram roughly centered at Collier and Mulcaster streets.The grant stipulates that the land will be used for the express purpose of a Market House and for market trading. In stronger language, it says: “and for no other use or purpose whatsoever.”

The cornerstone for the original Market Square was laid in 1846. Says an account of the day: “The cornerstone was laid and after some long speeches, the Royal Anthem was played. Then all went for refreshments at the Queen’s Hotel.”

Market Square suffered damage by fire in 1875, was rebuilt in 1877 and enlarged with a new wing. The Market Square building served a double purpose as the first floor was for the farmers’ market and the second floor was the seat of municipal government. The site is marked today by a huge archway in the stylized shape of the original market building, bridging Mulcaster Street at Collier Street.

By the 1950s, Barrie was evolving from an agricultural community to a more diversified economic base. The manufacturing sector dramatically increased in size, as did the retail sector. The Town needed room to grow and that included the downtown core. In 1952, Ontario Bill 27 came into effect. It nullified the Crown Land Grant and gave the Town of Barrie the right to do anything it wanted with the land. In exchange, the Town of Barrie took on the obligation to provide the Barrie Farmers’ Market with a building and a place of operation, which is why the Barrie Farmers’ Market is held on the premises of Barrie City Hall, both outside during the spring and summer months and inside the City Hall Rotunda through the autumn and winter. Bill 27 stipulates that if the agreement is no longer workable, that the City of Barrie must provide an acre of land and a Market House for the Barrie Farmers’ Market. 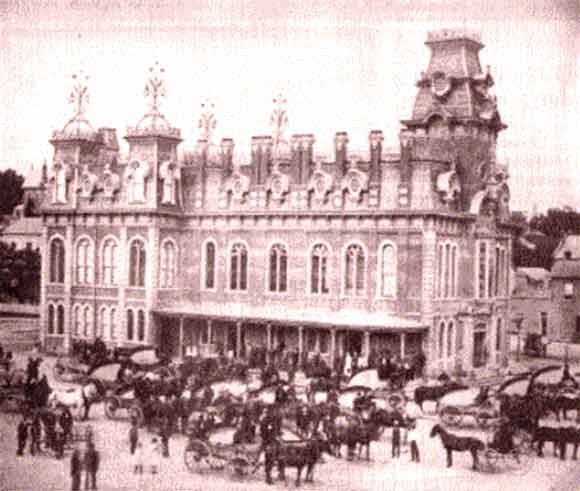 This is the Market Square as it looked in the “grand old days”. Not only were vendors set up inside, but some chose to sell off the back of their wagons.

Join our Newsletter for market, vendor and food updates!